A new addition to Raffles Xchange’s rows of coffee stops and mini eateries comes Phoenix Lava, the famous lava bun brand from Bangkok that boasts a huge array of fluffy buns with oozy fillings. The more popular option—one that has driven the internet insane as of late—is their signature Monthong Durian Lava Bun.

Once an exclusive snack that could only have been found in Bangkok, this humble bun shop is set to take Singapore’s Central Business District by storm. For the love of all things oozy, rich, creamy, we highly recommend you make a deliberate trip down to get your hands on some.

Having opened just a few days ago, their range of lava buns are still pretty limited, but clearly, that has not been a stopping factor for anyone, seeing as to how long the queues begin to snake from as early as 10.30am in the morning!

For first-timers, we highly recommend getting the Assorted Box (S$16) that comes with a piece of every flavour. Five buns in total, what you get in the box is the highly acclaimed Monthong Durian Lava Bun, Salted Egg Lava Bun, Japanese Sesame Charcoal Lava Bun, Matcha Lava Bun and Nama Chocolate Lava Bun.

It is also good to note that all their buns contain no artificial colourings. They are all coloured using natural ingredients like how the reddish hue of the Nama Chocolate is derived using beetroot juice or how the Monthong Durian Lava Bun gets its yellowish tinge from the chrysanthemum flower. 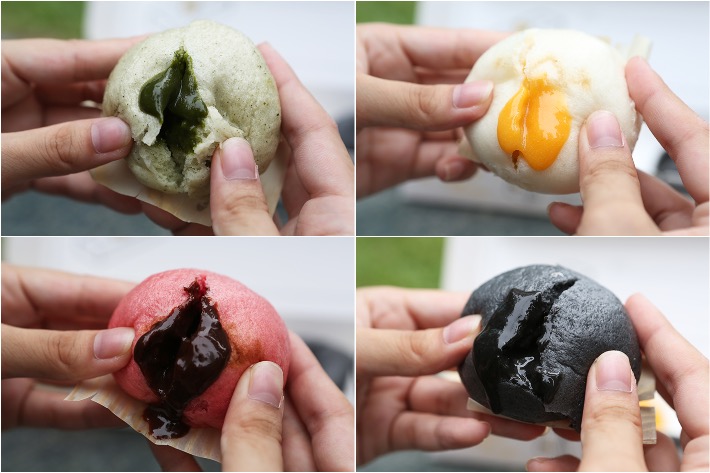 Every freshly steamed bun comes with the promise of a perfect ooze. Out of the five, we struggled to decide on a favourite because each of them was uniquely different yet delicious, and don’t even get us started on how fluffy and nicely textured the individual buns were.

Standouts for us—if we really had to pick—would be the Monthong Durian and the Nama Chocolate for the very simple reason that both fillings were unique, full of flavour and silky smooth.

When it comes to the king of fruits, it’s either you love it or you don’t. We belong to the former group which did not make it a problem for us to knock back a couple of their signature Monthong Durian Lava Buns (S$3.80) without hesitation. Creamy and luscious, the notes of good quality durian were apparent which made it all the more addictive for us. Every bun is made using Bangkok’s esteemed Monthong Durian that many in Thailand regard as the best variety of durian in the country.

Fragrant, sweet and almost buttery, we dare say that the Monthong puts up a good fight against the nation-favourite, Mao Shan Wang.