For all those of you who think that Yishun is a place where only the odd and the distasteful happens, be prepared to be proven wrong.

Sure enough, just beside Northpoint City, you’d find a quiet HDB area that’s home to a plethora of eats at perhaps some of the most affordable prices ever. While they’re also famous for Blk 925’s Chicken Rice, Chong Pang Food Centre and others, in one of the most unassuming corners is where you’ll find Lit Lit Xin Desserts, and just hidden within its premise is Lit Lit Xin Popiah, and 928 Laksa.

Trust these veterans to be extremely generous with their portions here, and perhaps that’s one of the biggest reasons why there’s such a long queue every day, which apparently stretches even further than we could see on weekends.

For less than S$3 a bowl, the laksa was jam-packed to the brim with fishcakes and diced up crab sticks. We paired ours with yellow noodles instead of the usual rice noodles, and the firmness of the noodles did really well to soak up the soup’s flavour without breaking apart, all while providing an extremely satisfying chew.

As for those who, like us, might not fancy having cockles in their laksa, they provide extra ingredients to replace free of charge! It’s also worth pointing out that their broth, while much lighter than most others, didn’t compromise on the rich lemak flavour at all. It cost us much of our self-control to hold back from finishing it.

Though we were plenty stuffed from the laksa, we couldn’t help but order a roll of popiah to share too. The skin was perfectly thin, yet it held together just right without tearing or letting any of the sauce seep through. With the golden ratio of turnip to beansprouts to peanuts, the texture playing off the tongue was unbelievable, only further accented by the fiery heat of their chilli.

We had our Ice Kachang customised a little to suit our preference, but rather than just removing the beans, they generously replaced it with cubes of pineapple and topped up on the rest of the ingredients too. It was an icy treat and a delight in itself. Tasty, shiok and colourful, what more could you want? 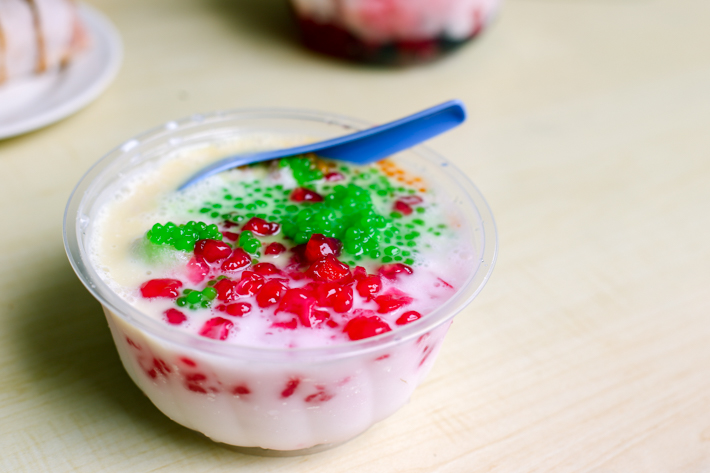 For something a little different from the norm, we decided to order a bowl of Red Ruby too. For those that prefer a more subtle coconut milk flavour, this is for you. The rubies definitely looked every part of a precious gem, perched on top and peeking through the coconut milk-infused ice.

With plenty of sago pearls and the perfect crunch to the chestnut interior of each ruby, this puts it ahead of plenty other dessert stalls. We do recommend coming down a bit earlier before the crowd comes in. While there are plenty of seats available in this small eatery, queues tend to get rather long during lunch hours, especially when it comes to queueing for their special bowl of laksa. Don’t let that put you off though. If you’re about that lemak life, this is a place you absolutely cannot miss out on.