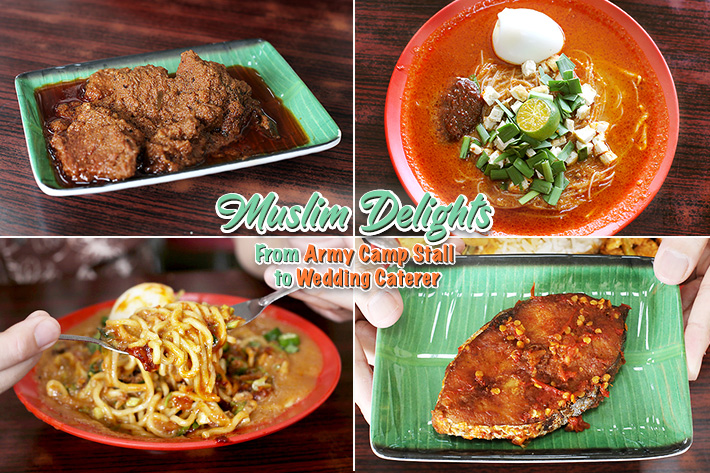 Everyone loves a good success story. Rags to riches narratives featuring humble beginnings with a side helping of struggles and growth are akin to Friday night soaps, except they give us hope that perhaps one day, we too can be the protagonists of a tale others would tell.

Muslim Delights is one such story.

Before the brand’s success as a Michelin Bib Gourmand awardee in 2018, it was originally a tiny, shabby Malay food stall housed in an army base run. Owned by the mother of current chef-owner, Hafidah Bte Daud, the work was gruelling, but she persevered. Little did she know, it’s was these formative years that would prove imperative to her later success.

Trouble struck in her early twenties. The decline in her mother’s health left Hafidah in a quandary: should she abandon her family’s culinary legacy, or look towards greener pastures instead?

The sentimental side of her prevailed. She dove into the business was rewarded by her continued success. Come 1997, the couple decided to move beyond the financial security of the army camp, settling at multiple locations before their current spot at Upper Paya Lebar Road.

At each place, they won over the adoration of their customers with Hafidah’s titillating signature dishes. The popularity of her stall grew, and soon after, she was receiving offers to cater for weddings and events. This alignment of her past experience and future potential is a serendipitous one, and after establishing an official catering arm, the rest is history.

While the main focus for the brand is on its wildly successful catering business, its restaurant still enjoys an equally healthy reputation. Especially on weekdays, you can find a constant stream of patrons – many of whom are decades-long regulars – still relishing in the comfort of Hafidah’s flavourful fare.

Arriving at noon, we were just in time to avoid the brunt of the lunch crowd.

The comforting sounds of cooking and the vibrant aroma of spices permeated the space, creating a homely and welcoming atmosphere reminiscent of a family-run establishment that sets all who enter at immediate ease.

A perusal of their colourful and plentiful selection of freshly prepared dishes drew our attention to two dishes, the Sambal Ikan Batang, and the Beef Rendang, both of which unsurprisingly turned out to be customer favourites. 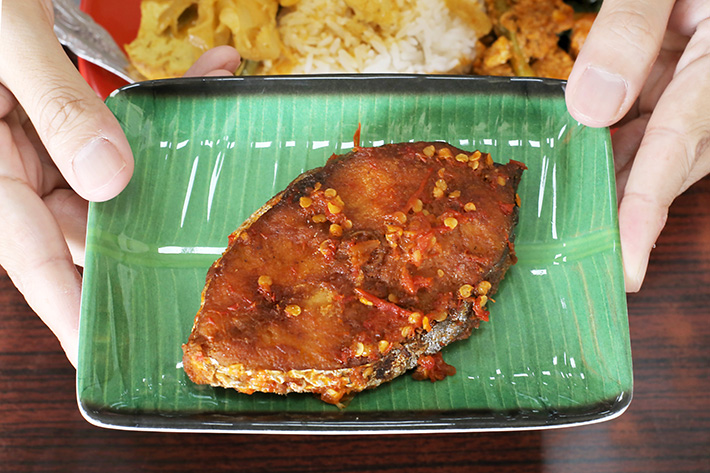 The batang fish (S$3) slice arrived with an obvious springy firmness only found in fresh fishes. Pulling apart the fish cemented our observations – the flesh was succulent and juicy, with individual flakes holding their shape and texture even against pressure.

Instead of an overly crunchy and salty exterior, the skin here is only fried to partial crispness. This provides just enough innate brininess to contrast against the soft interior while complementing the sweetness of the fish.

When paired with a generous layer of sambal, the spice transforming what was initially a mild dish into a more exciting yet balanced one; the sambal doesn’t overwhelm, but instead brings forth the inherent flavours of the mackerel while simultaneously allaying its oilier and saltier skin. 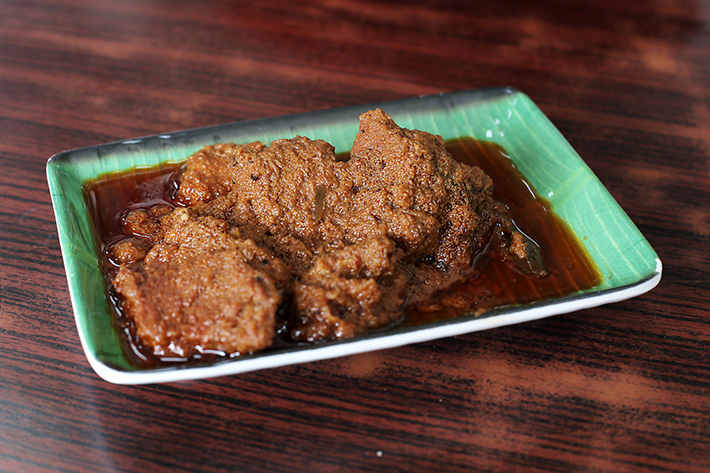 The beef rendang (S$3) came with sizable chunks of beef, each drenched with a hearty serving of sauce. Muslim Delight’s rendition of the sauce is smoother and lighter as it doesn’t have a bed of coconut shavings for the sauce to build a body off. For better or worse, this ultimately comes down to preference.

Richly decadent, the sauce was an alluring complexity of flavours – nutty, spicy, savoury, sweet – without any one overpowering the rest. Even as we continued to liberally spoon it onto our rice, its airier texture allowed for easy consumption without the onset of taste saturation.

The beef itself was a delight as well. Tender to touch, the pieces pulled apart easily without falling into bits. Stewed until the meat is suffused with the medley of spices, even if you prefer to skip on the sauce, subsisting on the protein alone will not devoid you from the resonant flavours of the dish. 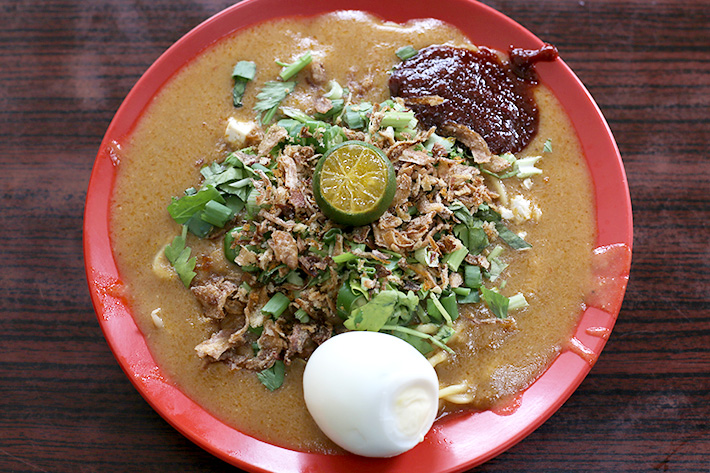 Known for more than her nasi padang, Hafidah’s noodle dishes have been captivating the hearts and stomachs of her customers since the beginning.

Although usually a breakfast dish, the mee rebus (S$3) was still a must-try dish. The kernel of mee rebus lies in its gravy; to infuse it with a robust flavour involves a laborious process not many establishments are willing to wholeheartedly commit to.

A vivid visual, it arrived with a generous dusting of toppings – spring onions, fried shallots, and fried beancurd skin (tau kwa) – teetering atop a bountiful serving of noodles, and a whole egg precariously perched on the edge of the loaded plate. For a price of just S$3, it felt like it was too good a deal to be true. 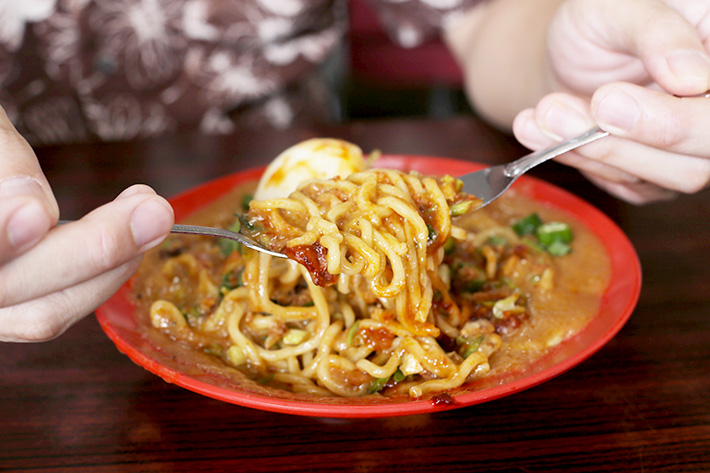 Thankfully, we were proven otherwise. The gravy was expectedly sweet; unlike other variants with sharp saccharine tastes from a heavy dousing of sugar, the honeyed tones here stem mainly from the assortment of naturally sweet ingredients.

The presence of condiments further interrupts the consistency of the dish. The round fullness of the sauce benefits from the lime’s injection of acidity for a tinge of zest; from the tanginess of the spring onions for a breath of delicate freshness; from the poignant flavour of the fried shallots for a supplement of intensity. 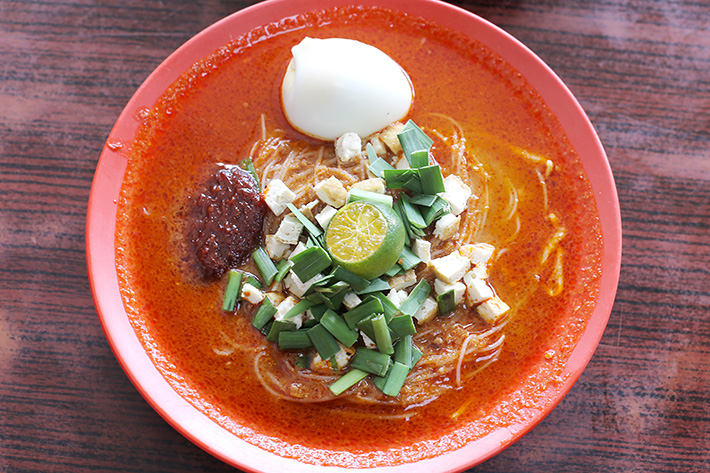 Unlike mee rebus, Muslim Delights’ mee siam’s broth is much thinner, with sweet notes steeped in sour undertones and overlayed with a more prominent spicy presence. Striking in its red colouration, the broth was bursting with a vibrancy that belied the abundance of ingredients used.

Delectably silken, the broth is every bit as flavourful as its appearance suggests. Delicate in taste, it is easy to be overwhelmed by mee siam’s intrinsic spiciness. To help, there’s a simmering of gentle tartness (which you can augment by adding more lime) to make the broth even more refreshing. In the process, this helps mellow out any significant kicks of spice too.

For spice lovers or those who like a challengee, ask for an extra helping of sambal for a fiery experience you’ll likely not forget! 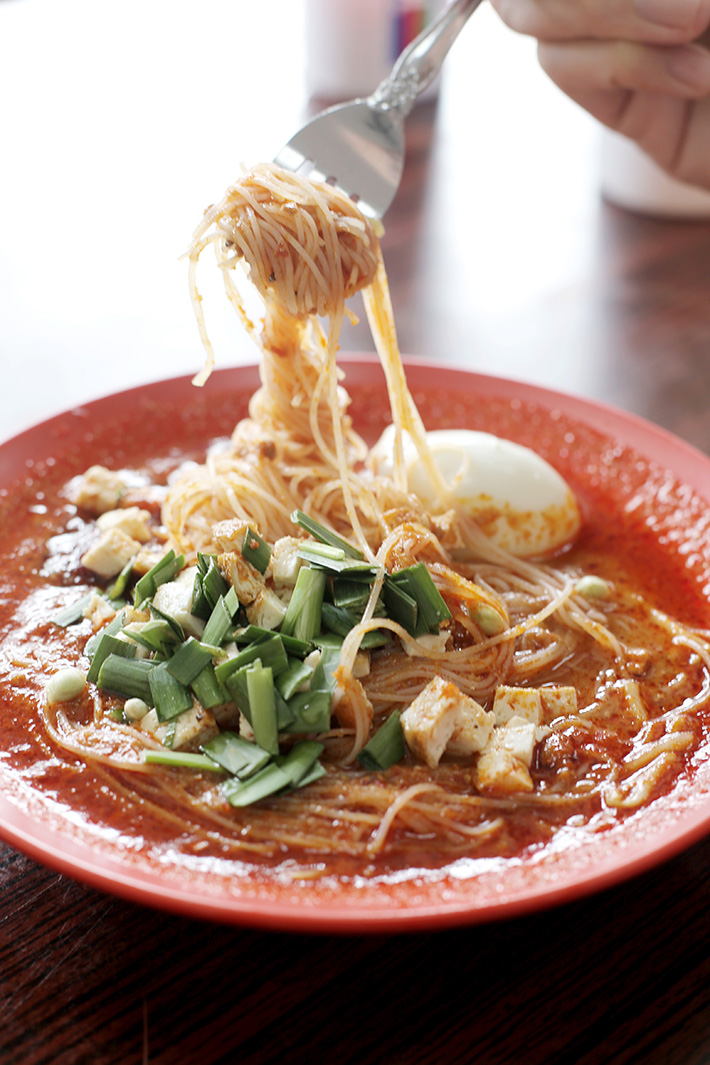 While the noodles from the mee rebus were not particularly noteworthy, the beehoon here was a pleasant surprise. Even after repeated soaking in the broth, the strands of the noodles remained wonderfully taut and separate. Heftier than other variants, it pairs well with the fine-bodied soup; by taking centrestage, it provides a foundation for the flavours of the broth to be augmented by.

Alternatively, consider letting the fluffy tau kwa bits soak up the broth before popping them. You’ll be met with a bright, piquant burst of saturated flavours reminiscent of summer.

A secondary focus for most other places, the egg here is worth a mention for two reasons. First, even at its price point, you get the entire egg instead of half. Next, it was cooked just right – a bouncy crystalline exterior encompasses a perky, yellow centre. No overdone chalky, yellow-grey yolk here!

At the end of our culinary journey, we departed with our stomachs full and our spirits high. Eating at Muslim Delights is akin to returning home to a warm meal – the food is made with love and care, and the atmosphere is homely and unassuming. More than just a story, more than just a nasi padang stall; visit Muslim Delights not just to try quality Malay food at prices that border on unrealistic affordability, but visit it to taste the history of its legacy as well.