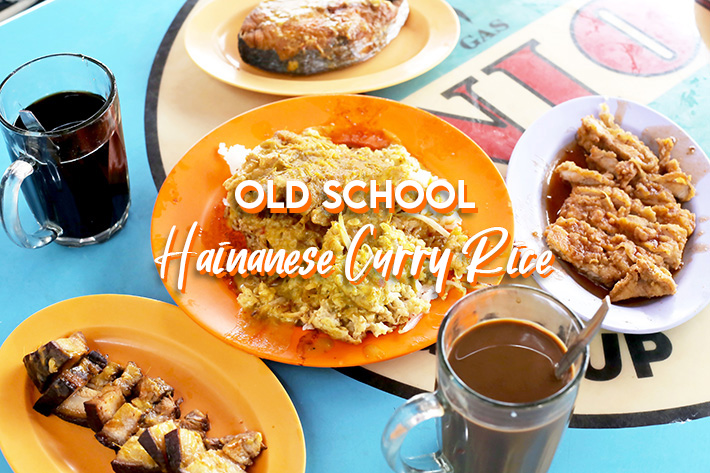 Take a gander along the whitewashed streets of Tiong Bahru and you’ll find soft notes drifting from half-opened café doors, inside which café-hoppers lounge with their preferred coffee concoctions. When faced with a scene exemplary of a hipster café enclave, the furthest thing from mind is a traditional, age-old hawker stall embedded amidst its vicinity.

It is in the heart of Tiong Bahru’s café stretch that we find Loo’s Hainanese Curry Rice, a tiny, humble stall sandwiched between two other equally nondescript stands in a weather-worn, seafoam-hued, open coffeeshop space. On its left is a rustic bakery run by an ex-luxury hotel pastry chef, while its right sits another successful relic of a bygone era.

Stepping into the shadow of the stall is akin to broaching a time portal – the clinking of tidy but worn equipment; humid air heavy with cooking; hoary but utilitarian outfits from yonder; messy heaps of glistening food. It’s a far cry from successful eateries of today: you won’t find food with impeccable visuals, nor will you be treated with top-notched service, and you can only dream of dining in the comfort of air-conditioning. 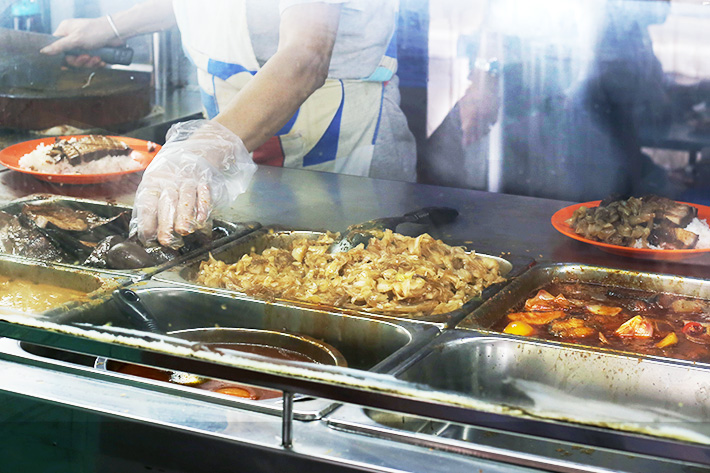 Arriving just after ten in the morning – the usual time the stall’s display starts to fill up – the modest area was already brimming with eager diners, eyes keen as they peered into the tiny display, awaiting the arrival of their favourite dishes.

Weaving between tables was Mr Loo Kia Chee, tray teetering as he hurried back to his usual spot behind his stand. With seasoned adaptability honed by decades of juggling cooking, serving and interacting with throngs of hungry diners, he smoothly resumed his role as a chef, deftly adding the final flourishes to his next dish.

Don’t bother trying to catch him for small talk during peak meal hours. Mostly austere and enshrouded in a constant air of purpose, Mr Loo did not achieve success by being casually indolent. He built his accomplishments through a ceaseless routine of hard work, and it’s a habit that he does not intend to break. 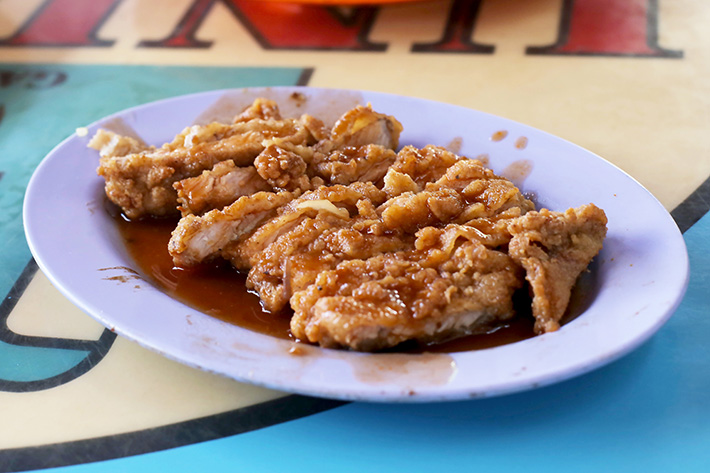 The secret to why Loo’s pork chops (S$2 for small, S$3 for large) are so delightfully gratifying is simple: every step of the process adheres to time-honoured practices handed down by his father. Instead of subsisting on bread crumbs, Mr Loo continues the more laborious process of coating his pork chops in cream crackers. And not just any cream crackers; only the Khong Guan variety is satisfactory.

When doused in its classic ketchup-based sauce, these slices go from lusciously enticing to outright sinfully addictive, with an easy-to-pop profile that leaves you constantly begging for another.

Mildly sweet, the sauce bisects what is otherwise a dominant savoury-on-savoury profile, allowing the honeyed notes of each slice to stand out against your plate. Moreover, the natural brine of the pork alleviates any potential cloying from the dish’s nectarous profile, leaving behind an effervescent sweetness that refreshes your palate.

The advantage of using a cracker coating is two-fold: it allows the juicy pork loin to retain its moisture, and offers a toasted crunch that’s more buttery than harsh. Paired with the sauce, the crust retains just enough texture to give a satisfying bite before meeting the tender protein core, but never too thick a layer so that the crunch overwhelms the robust profile of the meat. 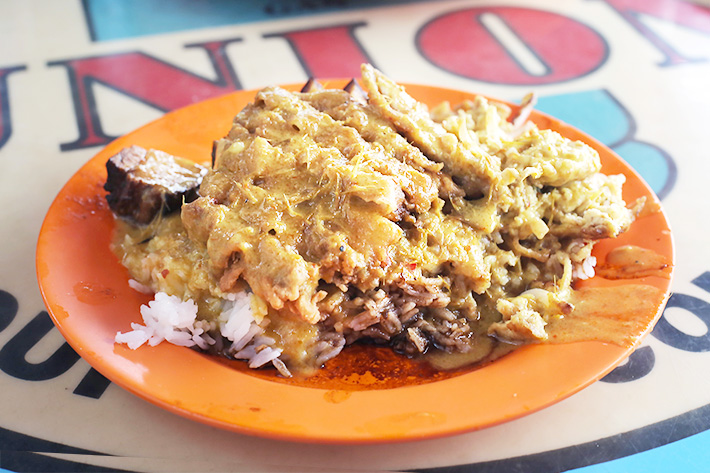 Alternatively, if you choose to get the pork chops as part of a self-contained plate, it will be drenched in a generous layer of curry instead. An equally palatable variant, Mr Loo’s curry is the other linchpin of his brand’s success.

The product of a 70-year-old recipe handed down from his father, this warm, golden sauce requires a grand total of three days to prepare. A stickler for tradition, all ingredients are diced, grounded, then mixed under the watchful eye of Mr Loo. This is how he ensures that each batch of curry remains consistently excellent

Noticeably fragrant, with a sweeter than spicier tinge, the curry is surprisingly light, making it the perfect choice for ladling over your rice (and honestly, everything else) with. Courtesy of an ample infusion of coconut milk, the curry runs smooth, easily seeping between the crevices of the uneven crumb coat. The strips become chewier as a result, trading their crisp for a myriad of spices made even livelier with the addition of the curry. Deceptively plain, and perhaps a little unattractive, lor bak (S$2) is a dish that often slips under the radar of newcomers who bolt towards the curries instead. A common sight in many local establishments, why visit Loo’s for this when many arguably fantastic iterations exist elsewhere?

Literally translated as “sauce meat”, there are two components to this dish: the sauce and the meat. Here, the crackling dark skin belied the luscious flavours hidden within – mostly husky and savoury, the heavy flavours of the protein were partially alleviated by the subtle sweet undertones, making for easy repeated consumption.

Next, regardless of how exquisite it tastes, a good lor bak needs to match up in mouthfeel too. The slab came in uneven chunks, with a splendid ratio of thick alternating layers of crystalline fat and tender meat. This allowed each mouthful to be filled with a parallel incongruity in textures, making the entire affair incredibly enjoyable. 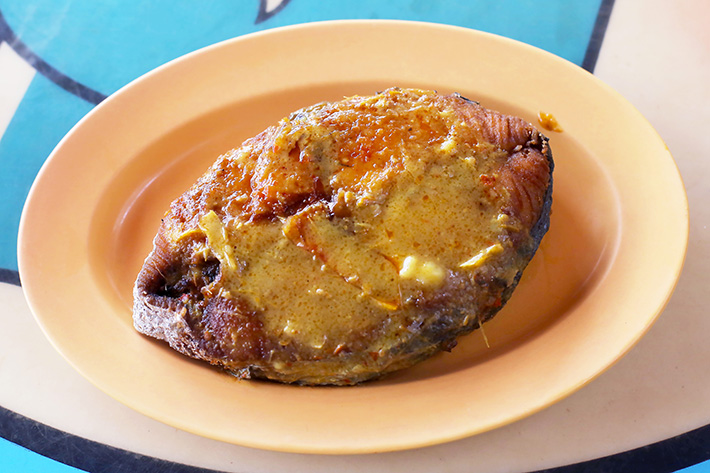 Besides the lor bak, another unexpected dish that seems to feature on many surrounding tables is the fried batang fish (prices start from S$5). Arriving in a considerable slice, it commanded the attention of all at the table with its sizable heft and fragrance.

Our initial attention was drawn towards how the burnished bronze exterior was pulled taut against the inner folds of fish – a promising display of the kitchen team’s meticulous fire control. Despite the crisp outer layer, the skin was still pliable, making for easy removal for those who dislike its piquant flavour.

Cutting the slice apart revealed a moist, ivory interior. Tender yet firm, the individual folds of the fish pulled away easily without succumbing to the pressure of utensils; a characteristic only evident in the freshest fishes.

After appreciating the fish on its own, feel free to spoon some leftover curry over it. The intrinsic sweetness of the curry allayed its saline profile, and added an additional texture dimension by coating the coarse exterior in a silken layer. When we concluded our meal, it was during the zenith of the lunch hour. The young, the working, and the old; each group had its own motivation for waiting in the stifling humidity for Loo’s fare. Perhaps it’s an endeavour in chasing the fleeting taste of a disappearing era, or maybe it’s as simple as wanting to experience the affordability and quality of the past in modern Singapore.

Whether the reasons are anchored in the past or present, in that single, temporal moment at Loo’s, all of us exist upon the vertex of the past and present. When masticating on the rustic flavours, we are brought into the cusp of Mr Loo’s own history while existing in modernity; we are but visitors on his borrowed nostalgia.

This is why Mr Loo’s food captivates. You depart not just with a full stomach; through a simple plate of pork chop you experience a newfound wistfulness for memories of decades long before your time, and with a melancholy from the knowledge that with the inevitability of time, it too will dissipate into the ages.