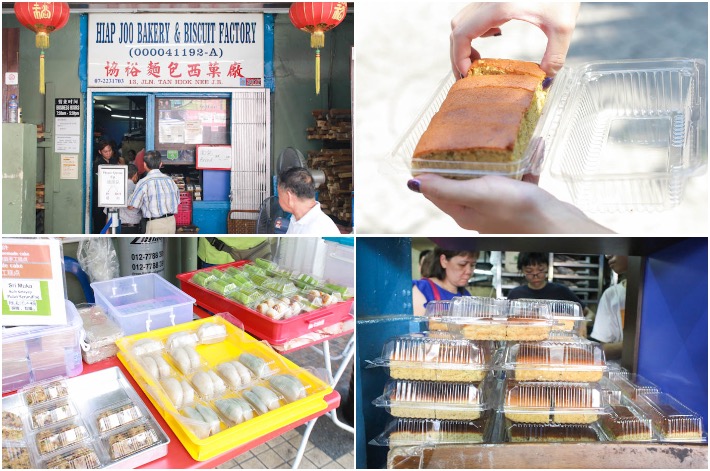 Traditional bakeries are hardly seen in cosmopolitan cities nowadays and we find that such a pity. There is something special about stepping into an old-school bakery, taking in the fragrance of freshly baked bread and being surrounded by pastries that you grew up indulging in.

One that is still very popular among its loyal customers is Hiap Joo Bakery & Biscuit Factory in Johor Bahru. Just a stone’s throw away from the customs, this humble bakery shop is never seen without a queue and for a good reason too—they are known to have the best banana cake in Johor Bahru!

Curious to find out if this bakery really lives up to its hype, we decided to start queuing at 11am when the first batch of banana cakes are ready for sale. 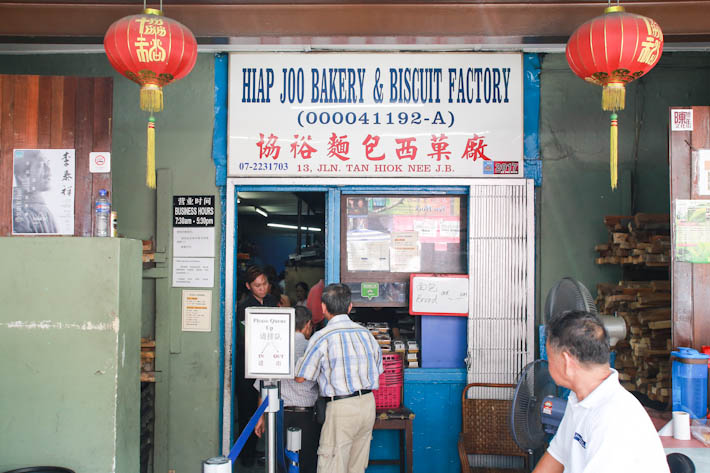 Do not be deceived by its unassuming appearance because their customers are not just made up of natives but also foreigners and even prominent figures such as the Sultan of Johor! There are many Singaporeans who make it a point to purchase a few boxes of banana cakes and buns before going home.

The key to success for Hiap Joo Bakery & Biscuit Factory lies in the traditional methods of baking their pastries in a wood-fired oven which helps to enhance the flavours of their cakes due to even heat distribution.

Everything remains the way it has been since business started in 1919 and this persistence in sticking to traditional baking methods is why they are able to maintain that level of perfection found in their baked goods.

Moving on to the star of the show—Hiap Joo Bakery’s famous banana cake.

Extremely moist and bursting with rich banana flavours, you could tell at first bite that the bakery uses high-quality bananas in their recipe. The sweetness of the cake comes from the banana fruit instead of confectioners’ sugar and we love how the cake had a nutty texture without it being too rough. Fans of banana cakes will not be disappointed!

We went for the small banana cake (RM5) which we felt was a decent size for sharing. Alternatively, most customers in line chose to have the large portion (RM10).

Hiap Joo Bakery & Biscuit Factory also makes amazing steamed buns with various fillings such as coconut, red bean and peanut. If you feel like munching on the go instead, consider some of the light snacks that are put on display outside the shop.