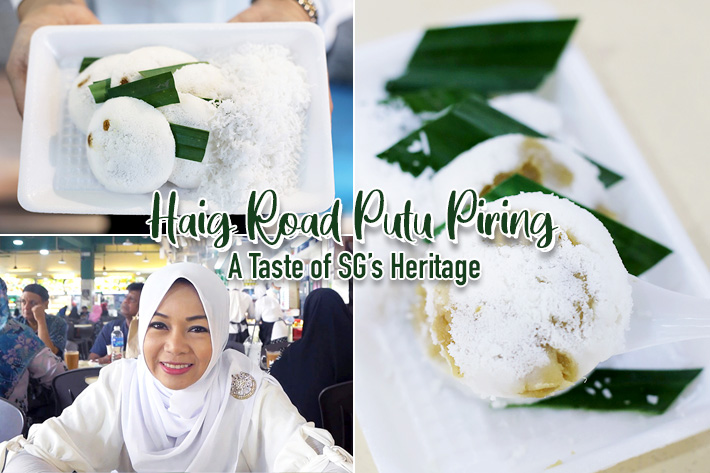 Success doesn’t come easy. Sure, there are tales of the seemingly superhuman forging successes without being hampered by hardships, but most similar stories dance to a different cadence. Alluring in their ebb and flow, these narratives usually vacillate between fortune and adversity, only accumulating into an apex after repeated cycles, the final victory a testament to their unfaltering efforts.

This structure is especially pertinent to tales from the F&B industry in Singapore – the intense competition and capricious whims of the market easily bringing many to premature ends. However, those who succeed become the wind that guides those looking to achieve similar feats. In today’s tale, we look towards Haig Road Putu Piring, a heritage brand that managed to resist the erosion of time while holding on to the essence of its traditions.

This is the story of Aisha Hashim, the 5th generation scion and current owner of Haig Road Putu Piring. But her story begins in the 1930s, set in the weather-worn pushcart of a dedicated putu piring peddler in the streets of Geylang Bahru. 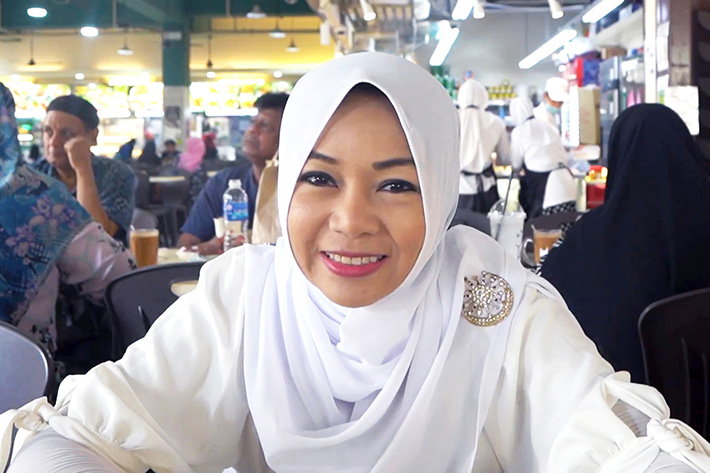 Putu piring – soft, airy local Malay sweets made from rice flour with a centre of melted gula melaka – were common then, enjoyed by the young and old alike across multiple ethnic groups for its light profile. To this peddler, it was her livelihood, but little did she know of the impact this humble dessert would have on her descendants.

Fast forward to the present era where putu piring has become yet another culinary heritage that is gradually disappearing in the face of modernity. Tracing this thread of putu piring leads us to Aisha’s family, heralds of this gastronomical tradition who find themselves at crossroads after permanently losing their original rental spot.

Halfway across the globe in Massachusetts, now living her dream as an assistant pastry chef, Aisha received a plea from her parents for her return. Without a new place and a full team of workers, the culinary foundation that her great-great-great-grandmother had built would soon dissipate with time.

Despite finally achieving her dream of becoming a pastry chef, Aisha chose tradition over ambition, honouring how her parents’ putu piring business brought her to the States to begin with by returning to her gastronomical roots in Singapore.

For Aisha, the choice was a difficult but simple one. Putu piring is more than a dessert, it is the lifeblood that binds one generation of her family to another.

She grew up amidst the fragrance of this dish, picking up the craft after she had completed her PSLE. Devoting two years to honing her skill, initially apathetic, Aisha soon developed a deep-seated appreciation for putu piring during her training process at Haig Road Putu Piring. And it was precisely this attachment to the dish that propelled her to heed her parents’ call.

Aisha soon found that location and manpower weren’t the only factors impeding her parents’ business. The truth was that putu piring wasn’t as popular as before – it is mostly unfamiliar to the younger generation and the general palate of the nation has shifted to contemporary sweets. Armed with her experience and the support of her husband, Aisha set out to restructure the brand.

To begin, Aisha was determined to reduce burgeoning labour and operational costs by mechanising part of the putu piring making process. Staunch traditionalists, her parents initially resisted, believing that no matter how laborious the process, it is the literal human touch that imparts the dessert with its elevated flavour.

After Aisha reassured her parents that automation can exist parallel to traditional methods, they relented, and Aisha’s reformation allowed the brand to more comfortably persist into modernity. 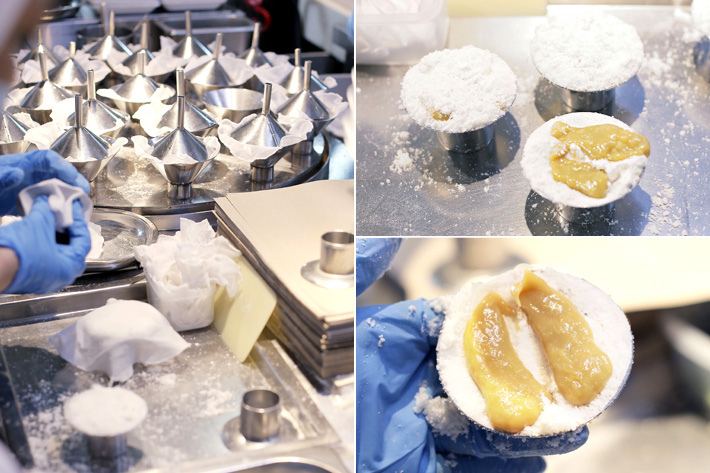 Even today, Aisha retains the timeworn techniques of her forebearers: marinating the rice flour, seasoning with salt water for flavour, and sieved multiple times to ensure a silken finish. Only the more labour-intensive steps such as grating coconuts and chopping gula melaka were mechanised, and most importantly, the core recipe remains untouched.

Besides fundamental techniques, the other half of a good putu piring is quality ingredients. Putu piring is an intricate medley of carefully curated ingredients; the inferiority of even a single element sets off a chain effect, tarnishing the rest of the blend. Hence, despite the cost, only the highest grade rice flour and non-refined gula melaka imported from Java are used.

While this coalescence of the old and new provided some respite for the family, there is still a constantly looming threat of a divergent modern palate.

Believing that as long as the contemporary renditions continue to draw sufficiently from the original inspiration, the spirit of the dish endures even in newer forms, Haig Road Putu Piring has taken to progressively introducing new putu piring flavours into the market.

A brown coconut version with texture and taste closer to putu piring’s Chinese cousin, the tutu kueh; a chocolate option to entice the younger generation with a more familiar flavour; finally, a rich durian variant to capitalise on Singapore’s general adoration for the fruit. Over time, Aisha’s chance paid off, with these flavours serving as a less daunting way for new customers to get acquainted with the dessert. 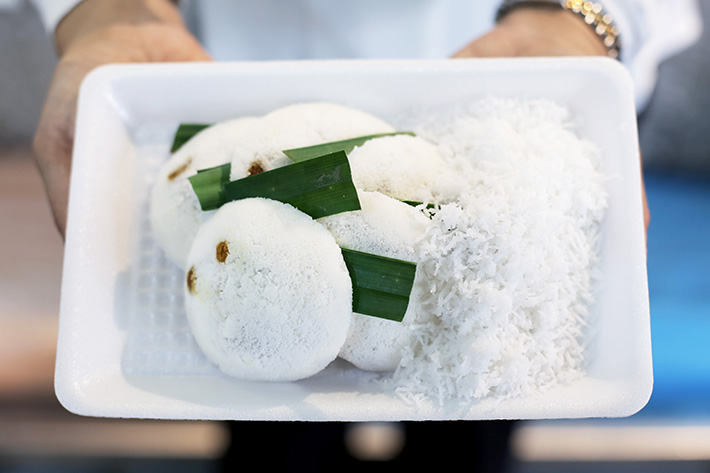 The kernel and unsurprising bestseller of the brand, this is the putu piring from which this whole saga stems from.

If the rice flour is grainy or leaves a residual powder coat in one’s mouth, the putu piring loses its innate airiness, resulting in a saturated taste of flour alongside an unappetising mouth feel. Likewise, if the gula melaka fails to melt sufficiently or does not have an ideal flavour, one will not get as gratifying an experience when tasting the brown sugar between the seams of the flour coat. All of which are snafus you will not encounter when eating Aisha’s creations.

Effortlessly wispy, the rice flour ends up coating the gula melaka with an almost diaphanous layer courtesy of its powdery fineness. Instead of feeling as though it served no other purpose than for the filling to create a peek-a-boo taste surprise with, the mild salinity and fragrant pandan tinge of the flour make it an especially complementary base from which the gula melaka is enhanced.

The highlight of the dish is naturally the gula melaka. Unlike the tutu kueh where the glutinous flour layer encompasses the filling in its entirety, you are treated to the occasional sight of gula melaka brimming from beneath. Glistening under the light, these pockets captivate all those in the vicinity with its irresistible wafts of honeyed aroma. Splendidly saccharine with an undertone of smoky savouriness; with flavours as rich and pure as this, it is no wonder that the brand insists on importing it from abroad.

In a dessert as delicate as the putu piring, its nucleus revolves around an exercise of establishing an elegant balance of components. Tip one and the castle crumbles.

Add on the complexities associated with using durian as an ingredient, the variations in taste – sweet or bittersweet? – and textures – fully creamy or slightly fibrous? – make for a difficult calibration.

Instead of struggling with fresh durians, the brand utilises D24 durian paste instead to provide a consistency from which Aisha can extrapolate a new ratio from. Gula melaka is then added to anchor the intensity of the durian flavour and to offer complexity and contrast that removes the onset of potential taste saturation.

The end result is a putu piring that is surprisingly light with the added bonus of having a lusciously creamy center. In company with the durian is the refreshing scent of pandan to partially alleviate the former’s heavier flavour without erasing the durian’s original piquancy.

For those who find the concentrated sweetness of the D24 durian a little too cloying, spoon a generous helping of fresh coconut shavings onto your putu piring before taking a bite. Not only does the robust nutty flavour of the coconut allays some of the overall sweetness, the coarseness of the shavings presents an extra textural dimension as well.

As the dust of her restructuring settles and the mist of rice flour clears, Haig Road Putu Piring continues to stand tall with the putu piring at its centre. Emboldened by her efforts and hopeful for the future, Aisha continues to look towards the horizon for ways to endear even more of the population to her putu piring, in turn safeguarding the dessert’s, and her own, culinary history.

At the end of the interview, Aisha picked up a freshly prepared putu piring, eyes soft, a playful smile quirked as she thoughtfully bit into it. She is back where she belongs, holding her family’s legacy in her own hands as she observed her bustling kitchen

One of Singapore’s best-kept food heritages, putu piring continues to pervade the shared culinary memories of the nation’s generations. Just as it has, and will continue to percolate Aisha’s family as it did her great-great-great-grandmother’s nearly a century ago.