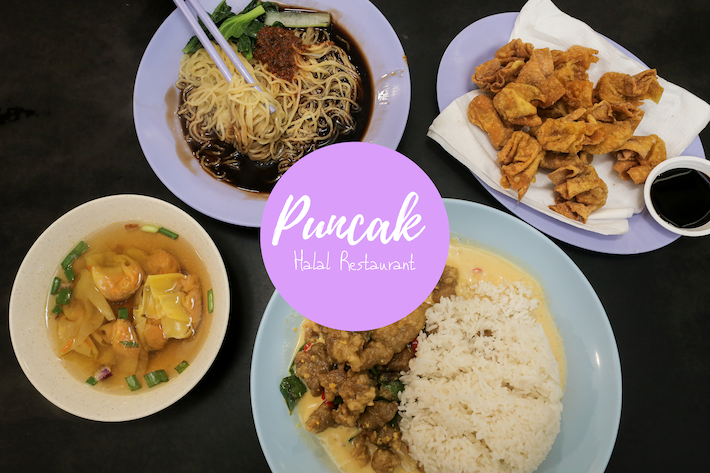 Puncak Halal Restaurant is a popular Muslim eatery located on Level 5 of Far East Plaza, where many office workers visit during their lunch time. It is usually packed with people and they serve Halal renditions of common Chinese zichar dishes. They’ve even added slight twists to some of them. With mains below S$7, they are priced affordably and on par with the price range of competing stalls. 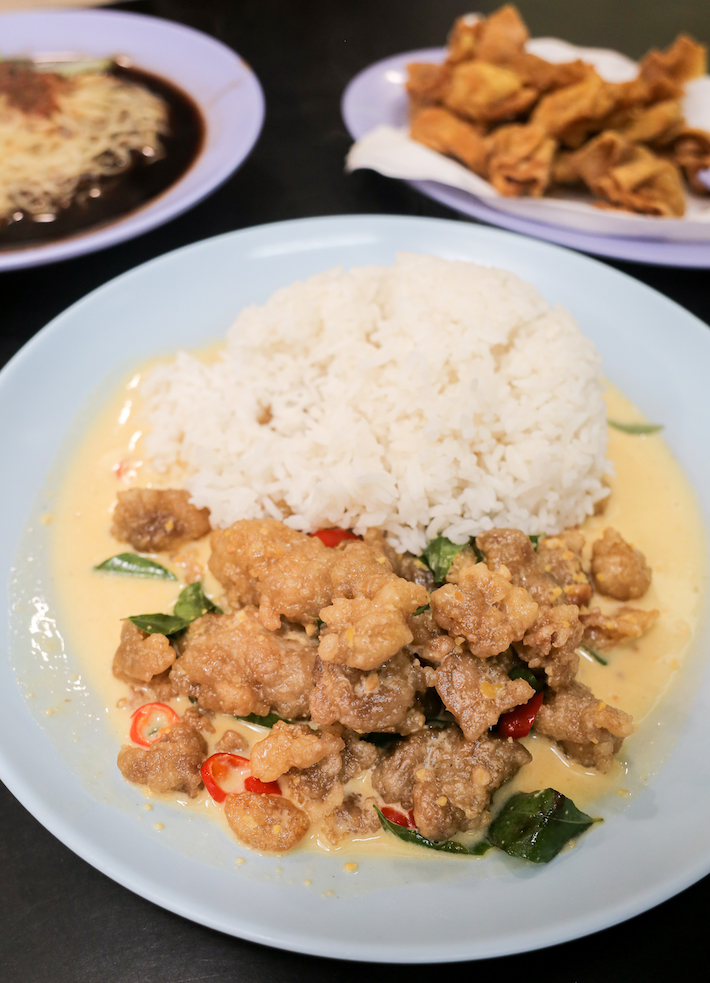 A classic order, the Salted Egg Chicken with Rice Set (S$6.50) came in a shade of light yellow, big bowl of rice and a rather sizeable portion of chicken.

The chicken bites were coated in a batter that had a slightly gummy-like texture, not crispy on the outside and slightly too thick. We believe that the chicken used were frozen ones as well.

The salted egg yolk gravy was on the watery spectrum and did not have the usual darker shade of yellow we expect from a dish as such. As we figured, it did not have much salted egg flavours, resembling butter sauce more than the name of the dish itself. It was still creamy though, and the kick of spice from the chilli padi was real.

For those who enjoy butter chicken, this might be for you. However, for those who love salted egg yolk sauces with bits of salted egg and thicker or drier consistency, this is likely to disappoint you. 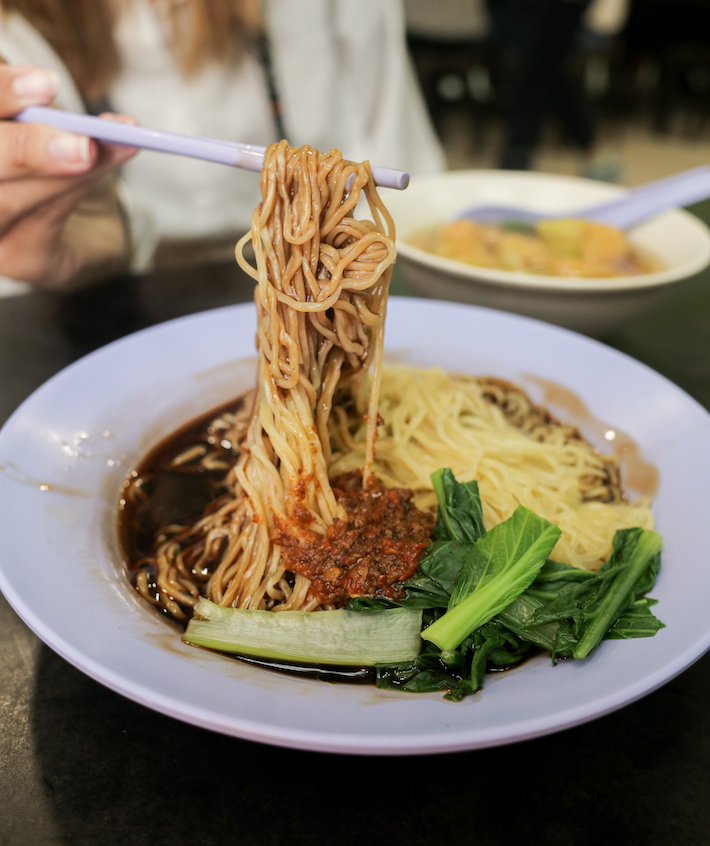 An uncommon dish sold by Muslim stalls, the Dried Wanton Noodles (S$4.50) was served with a bowl of wanton soup on the side. The noodles were soaked in a thick and dark sauce, topped with a spoonful of chilli. Unlike its look, it tasted bland yet spicy, it was rather lacklustre. The noodles were springy though, good texture, but did not soak up the sauce well.

We looked at the wantons in the soup and noticed that the fillings looked orange, which was strange because we were expecting minced chicken to replace the usual minced pork. We had a bite and realised that their wantons were meatless and were filled with carrots only. That was our first time having carrots wrapped in wanton skin and honestly, we were not convinced by this combination, especially with the wanton skin being too soft. 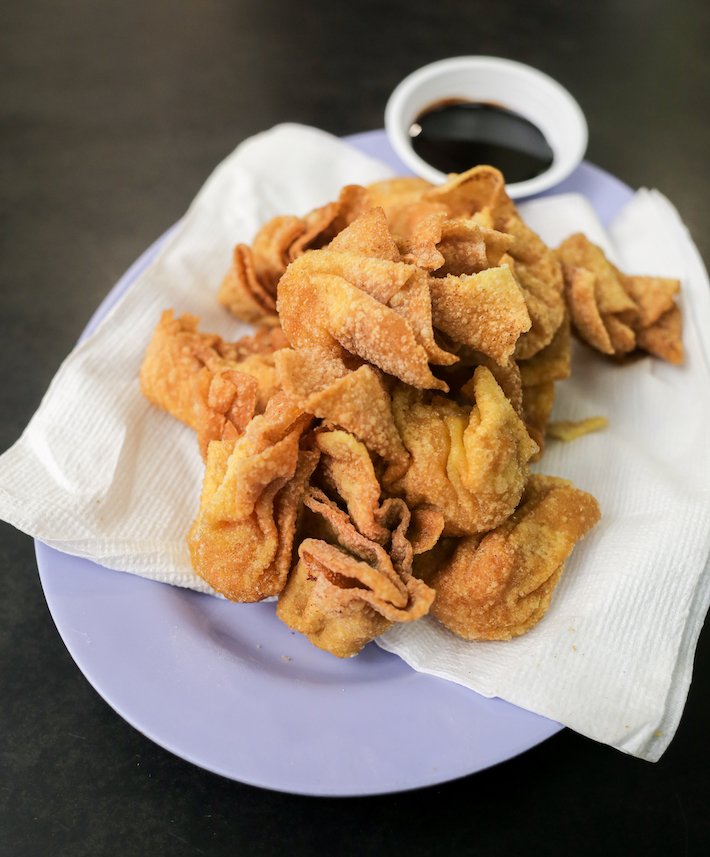 These are the same wantons as the soup ones but, the fried version. The Fried Wantons (S$6) were also filled with carrots, served with a sweet soya sauce on the side. This version was much better, resembling a fried spring roll.

The wanton skin was nicely crisp, not oily nor greasy, the carrots inside were firmer than the soup version’s which gave it a nice and crunchy bite. Dipping it in the sweet soya sauce made it a sweet and savoury concoction that was rather pleasant. 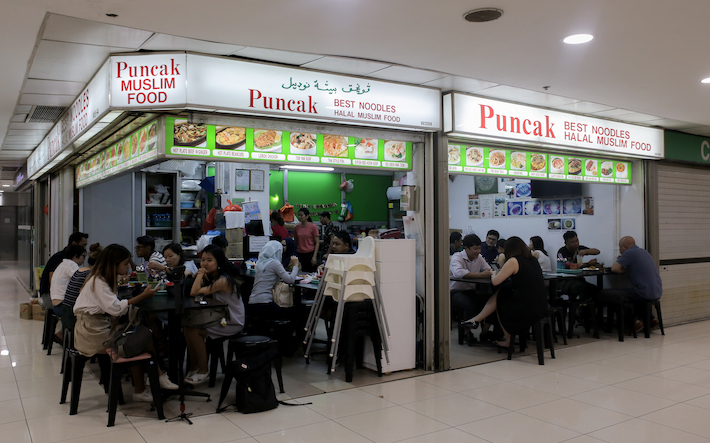 While the dishes that we tried were nothing to shout about, they were priced reasonably for the portions.

Their menu consists of many other dishes available for you guys to check out for yourselves, such as the Honeydew Chicken Noodles, Curry Chicken Rice, Hokkien Mee and so on.